On the grieving cycle following death, loss or divorce, after the first shock and denial, people become angry and blaming, they may get depressed as they gradually detach from the other person and old life. Only then are they ready to move to dialogue and bargaining to sort everything out. Finally they will reach acceptance of the new life and be able to move on.
No one likes to feel guilty, especially if they might have caused the break up of a family. Or partly caused. Or not caused it at all. Or indeed it was totally someone else’s fault, nothing to do with them. So if a spouse has had an affair, they may well argue it was because they were neglected, unloved and it wasn’t their fault the marriage ended. The other spouse may argue the contrary, that they had worked hardest, put up with a lot, but nothing was ever enough and then despite being a really devoted spouse, their nearly ex cheated on them! As for the other man or woman, it is never their fault either, even if they were a close friend of the deserted spouse. The marriage must have been in trouble or the affair would not have happened. 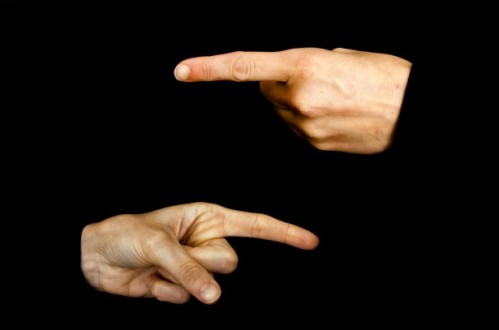 We – people – need deny responsibility for the chaos and misery flowing from our actions. We want people to like us, we want to believe we are good people. Opinions matter. They affect our sense of identity, of who we are. So we may re interpret the past to justify our actions. Often in the tumultuous grief following separation, couples may make things infinitely worse by demonising each other, which can lead to various other evils:
1. Fighting, arguments, violence and the appointment of a paid champion to ‘win’ in the displaced fury of legal proceedings. This results in wasted money and avoidable emotional and psychological suffering.
2. Damage to children caught in the middle of the break up. This can result in children being cut off from a parent, taking sides, looking after parents, being used as messengers, feeling guilty, falling behind at school and worse.
3. Loss of collateral relationships that may have been hugely important because the people concerned find themselves closely attached to the ‘wrong’ spouse. They feel they are from the wrong tribe, so they have to cut off that relationship. An avoidable bereavement?
4. Worsened economic situation, possibly poorer housing and reduced resources.
Of course there are benefits from divorce – miserable, violent, abusive and destructive relationships are ended. People feel relieved and optimistic about life again. They have hope for the future. It is completely unrealistic and unfair to vilify all divorce. However, what is certainly true is that by denying responsibility for your part in the break up and demonising your ex, you make matters worse than they need be. Also, importantly, the law doesn’t care whose fault it is. It only matters to you. Yes, we still have an anachronistic fault based divorce system and if you don’t want to wait two years from separation to get divorced by consent, you must have a fault based divorce, but nobody but you cares what the divorce petition says. You won’t get punished with less money or less time with any children. There are no adverse practical consequences. Despite all that, it matters to the people in the middle of the break up at the time. It matters a lot. But here’s the thing, when you have detached emotionally from your ex partner, moved on and recovered, it won’t matter to you any more either. Which is what I was saying when I started. Blame – it’s not your fault, but one day it won’t matter any more. . .