The Children and Families Act 2014 – Family Law is Changing

Heralded as the biggest change to the family law system in a generation, will today’s changes to the family legal system make any difference to real families? Certainly, shortening the time taken   for important cases about children in care to be decided by the courts will be a big improvement.  Children caught up in the care system were previously waiting over a year for their cases to be decided, which is far too long and very bad for those children’s happiness and life chances. The new time limit for a decision will be six months, a great improvement.

However, what about the majority of the families needing help sorting things out? For most families some of the changes are more apparent than real. Arguments over arrangements for the children are not likely to improve because people are supposed to avoid the words ‘residence’ and ‘contact’, just as they didn’t change when we swapped the words ‘custody’ and ‘access’ for ‘residence’ and ‘contact’. The issue of who the children live with when is still a thorny one and changing the words to ‘child arrangements’ makes little difference. Other than that, there is a change to a theoretical single family court, but again, this means that cases can be allocated to the county court where there are professional judges or the magistrates where there are lay (but trained) magistrates – but both will now be called the “Family Court”.  Will this make a huge material difference to court users given the decision-makers and buildings will be the same as before the name changed to “Family Court” remains to be seen!  There will still be the High Court for cases needed high court adjudication.  Some cases that would previously have been decided by a judge may be heard by a magistrate – but it will all be the “Family Court” so that’s all right then!

People who can afford it may feel increasingly inclined to pay for private adjudication by a family law expert in the field, to ensure the quality of the decision – this is called arbitration and might produce a dual system of private justice completely outside the state court system. It would save government money, but create a dual system for the haves and have-nots. There could be an issue over the quality of the decisions and interpretation of the law, if many complex and difficult cases are decided by non family law experts.

Against this background family mediation looks like a very sane and sensible option.  An experienced, qualified mediator helps a couple to make their own arrangements for their children and settle their own financial settlement.  The impartial mediator gives relevant legal information to help decision-making and the couple know what they are agreeing to. It is a fast affordable alternative to the vagaries of the court system and at least now people have to hear about mediation properly from a mediator.  Couples share the cost of the mediator and pay nothing if they qualify for legal aid, whereas there is no legal aid for most family law work any more, there is for family mediation. If couples don’t mediate they have to pay the whole costs of their separate lawyers, instead of share the cost of their mediation.  Before anyone can bring a court application they will mostly now have to hear about mediation before they can apply to court. This last change is one of the most sensible changes the new Act brings in and it is long overdue. Court fees are expensive and rising –  pointless if unnecessary. People will now be given a real choice and awareness of the options for sorting out their settlement and arrangements without using the conventional legal and court route. Mediation is the prime alternative and mediators can now explain it to couples properly, instead of people assuming it’s unsuitable for them or not even realising it exists and that legal aid still exists to help them mediate. 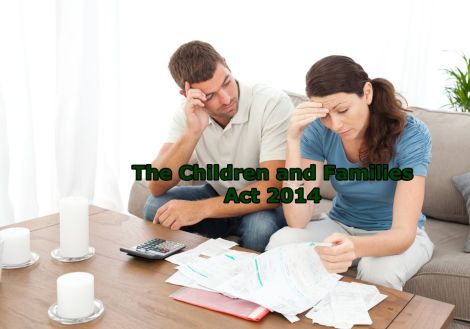 For the first time it requires would be applicants to court to hear about mediation and how it might be able to help them, before making their court application. This simply gives them a choice of court or mediation before they embark on the court route. As such it is a useful intervention. This meeting is fast becoming known as a ‘mediation awareness meeting’ – its formal name is the Mediation Intake Assessment Meeting or MIAM.  A qualified mediator will simply tell couples about mediation and the alternatives to court adjudication.
This is greatly needed, as put simply, if mediators don’t tell people about how mediation may help them, mostly people do not understand it and don’t try mediation. Before the compulsory referral to hear about mediation from a mediator in 1999, there were only a few hundred mediations a year. After legal aid applicants had to hear about mediation from a mediator in 1999, this rose to about 13,500 mediations a year and it has stayed about the same every year until last May, when all compulsory referrals to a mediator for mediation assessment stopped along with the abolition of legal aid for family cases. Then couples unaware of mediation simply went straight to court and the number of court applications has increased massively everywhere, with many fewer mediations taking place. The fact is, in many cases lawyers do not sell mediation; they are more likely to sell legal services and to negotiate the case in a conventional positional way. This increase in adversarial resolution is bad for families, turning them into opponents in what is often an expensive, long drawn out ping pong of letters and or court hearings.

Compulsory mediation awareness meetings do not mean compulsory mediation, but many people will choose to go on to mediate and save themselves and their families a great deal of time, money and avoidable stress. If some family lawyers don’t like it, and it is only some lawyers, we have to ask why are they so worried about people simply hearing what mediation has to offer? These people don’t have to mediate and no one is saying people should not hear about legal resolution methods. If people need to go to court, they can still go to court, if they want lawyers to write letters then they can pay for that, but a tiny proportion of cases do actually get decided by a judge, so deciding them even earlier in mediation seems like a good idea to most people.

The reality is that in most disputes over children, the worst thing that can happen to a family is a brutal fight over the children, replete with welfare reports, adversarial arguments and adjudication or shuttle diplomacy between lawyers at court, cobbling something together under immense pressure and making that into an order. A series of mediation sessions over a few weeks or months with changes being introduced and reviewed, improvements made and children’s views taken on board where possible, is just so much better for most families.

Where property and finance issues are concerned, mediation has a massively important role to play in resolving settlements fast and at proportionate cost. How much do you think should be spent on legal fees for resolving a financial settlement on divorce? Should it be 10% or 20% or some other proportion of the overall value of the family pot?  This is the thorny problem the courts are not addressing. There is a court rule that the legal costs must be proportionate to the value of a dispute. This is universally ignored, as it seems to convey no meaning to the judges or the legal representatives. It is common for the costs to be a third or half or even more of the value of the dispute – where is the sense in that? If you bear in mind that in most family cases, unless it’s a very short marriage or there’s a pre-nup., there is a starting point or yardstick of equal division of the assets, then the value of the dispute is probably no more than between 10% to 25% of the overall pot. Legal costs frequently exceed 10% to 25% of the value of the family pot. How can that to be regarded as proportionate to the value of the dispute? It isn’t proportionate at all.

So, in a nutshell, the changes with regard to compulsory mediation assessment meetings brought in by the Children and Families Act are mostly welcome and long overdue.  Compulsory mediation meetings before court applications can be made will enable a significant number of families to avoid court proceedings and expensive legal costs by choosing mediation, once they know how it can help them. Previously they often simply issued proceedings and the legal route was the default option. Now a real choice is being offered and it is up to mediators and lawyers alike to help couples make the best choice for their family, taking into account everything relevant to the family.  It is the couple that matters most and finding the best way forward for them, not what matters to the lawyer or the mediator – each trying to sell the service they prefer to sell. The family is at the heart of separation and divorce, how they sort out their arrangements, which process they use should be an informed decision they take and the advent of mediation assessment will help ensure public awareness of mediation when they need it most.  This is needed simply because without it as we have seen, people do not know about mediation or find out about it until it is too late.  There has to be a compulsory  mediation awareness stage  as once people have started going down the court route, mediation referral can be a bit late for many of them to gain the most benefit in terms of the expense, stress and delays of court proceedings.